Sudan is considered one of the few countries which enjoy a variety of tourism resources.

These resources are represented in the Red Sea Coast which extends for more than 700 kilometers and is characterized by many tourist attractions, including diving and under-water photography, besides boat rowing and water skiing.

The Red Sea Coast enjoys many gulfs and coral reefs as the area is free from contamination which plagues many seas and tourist areas in the world. Sudan also enjoys an ancient heritage in the field of civilizations and antiquities representing a great attraction for tourists both from within and outside the country. This heritage is centred in the Northern areas including Al-Naga’, Al-Musawarat, Karima, Al-Berkal, Merwie, Dongola and others.

These areas and others saw ancient civilizations proved by the remains of the pyramids and temples, with a great part of them still lying unearthed. These areas attract many experts and researchers in this field. In addition, they are considered archaeological sites not experiencing any toursit leap before, despite the availability of huge resources in them. Central areas in Sudan, including Sennar and Sinja, contain antiquities of Al-Funj Kingdom (The Black Sultanate). The antiquities of this area bear testimony to the long and authentic history of the kingdom.

There are many antiquities of the Mahdi State in east and west of Sudan and in the National Capital. These antiquities which reflect the glory and history of the Sudanese people, beside the existence of many other antiquities in other areas deserve concern to attract tourists from abroad to get acquainted with the history of the country at that time.

In East Sudan, at Sawakin area on the Red Sea, there are great antiquities indicating the existence of a historically great period of Sudan’s history. Sawakin island, for example, is considered one of the areas which witnessed urban development and unique styles of architecture. It is now regarded as one of the world’s few areas in this field. There are many tourists interested in this aspect of history and who can be attracted to these sites.

The state also set up Al-Dinder National Tourist Park for wildlife in the central state in 1935. This park is considered one of the greatest game reserves in Africa. It occupies a unique position north of the equator on an area of 2,470 square miles.

In 1990, the Government announced the establishment of Sanganieb national marine reserve on an area of about 12 square kilometers as a first Sudanese sea reserve at the Red Sea area. The government also set up Arous Tourist Village at the Red Sea area and villages of Jemieza in the Equatorial State.

Areas of games are represented in the Red Sea Hills and birds hunting at Kindy Lake in Darfur state after it had been protected against poaching. There are also game areas in South Sudan, Al-Dari Mountain, Al-Fuweir area, Al-Rugia Al-Zargha area, Talha Al-Misairi and Foanghar Mountain in Kordofan State. Sudan also enjoys many other tourist attractions such as the archaeological sites in the northern and eastern states.

Sudan stepped a vague, hostoric period as a political, local power emerged at the end of the 9th century B.C. which was named Kosh Kingdom. This historic period was divided into two eras: Nabta Kingdom – Merwie Kingdom. The history of most archaeological sites found in Sudan dates back to different periods including the Pharaohnic period – Karma – Kosh – Christianity – Islam.

The most important archaeological sites lying between the North and the South of the country, are:

Sai
Sai island lies to the south of the second cataract. It contains many antiquities including temples, monuments and cemeteries which almost represent all the cultural periods of the first stone age. They also represent the Pharaohnic period till the advent of the Ottoman Rule.

Sadinga
It contained some temples which represent the Pharaohnic period, besides some other cemeteries concerning Nabta and Merwie.

Soleb
It contained a temple that dates back to the Pharaohnic period and other antiquities of Egyptian and Merwatic origins.

Tumbus
Egyptian writings have been found in this area inscribed on rocks lying near the third cataract and a statue which dates back to the Merwatic period.

Karma
It is one of the most important archaeological sites in Sudan. It enjoys huge buildings made of unbaked bricks and is known as “Al-Duafoofah”, which dates back to the 203rd century B.C.

Tabo
This site is found on Argo Island, south of the Third Cataract and contains a Koshite temple and antiquities that date back to the Merwatic and Christian periods.

Kawa
This site has a number of temples of Egyptian origin as it also represents the Kush era.

Old Dongola
This is the capital of the lower Christian Nubia Kingdom (Mayuria). It was a church which has now been changed into a mosque. There are also houses, palaces and cemetries in this area.

Jabal Al-Barka
It is regarded as the religious capital of Nabta Kingdom. It lies near the Fourth Cataract and contains some antiquities including temples, palaces, pyramids and cemeteries which date back to different periods since the time of the Pharaohnic era, Nabta and Merwie.

Nuri
This site contains pyramids and royal cemeteries as a number of members of the ruling dynasty had been buried there during Nabta era.

Al-Kuru
This location is famous for a group of cemeteries inscribed on rocks with ornaments that date back to the era of Nabta’s first kings.

New Merowe
The new town of Merowe now lies near the Fourth Cataract and enshrines cemeteries which dates back to the era of Nabta. Yet, no excavation work has been conducted there.

Al-Ghazali
This site is an oasis in Bayoudah desert, a few kilometers away from Merowe town. Al-Ghazali contains relics of the Christian era.

Merowe
This is the capital of Kosh Kingdom (Old Merowe). It enshrines some pyramids, temples and relics of a royal town.

Yellow Musawarat
This area represents a religious centre that dates back to the Merwatic period. It contains temples with remarkable inscriptions and a great building made of sand stones which is called the great yard.

Al-Nagaa
This site is similar to yellow Musawarat; it represents a religious centre lying in Al-Butana region (in the central part of the country). It contains many ornamented and inscribed temples, besides cemetries and relics of a town.

Wadi Nagaa
It represents the remains of Merowe town and contains relics of a royal palace and many other relics.

East Soba
Here there are relics of a church, palaces, houses and cemeteries.

Sennar
It contains antiquities of an Islamic town, but work has not been completed to determine the size of those relics.

Sudan has a vast and various stock of antiquities and national heritage which represents promising resources for investment if it is utilized in the best way.

There are a number of archaeological missions in Wadi Hor area, Jabal Marrah and Kordofan. Sheikan Museum has also been rehabilitated. In Khartoum State, there are investment projects intended to rehabilitate Sudan National Museum and add some tourist aspects. In Western Sudan, Jabal Marrah represents a unique tourist area with its splendid natural scenery, captivating water falls, mineral water, moderate climatic conditions, besides the folklore, heritage and popular arts of the area.

Welcoming words from the Ambassador. I have the great pleasure to welcome you to the website of the Embassy of the Republic of the Sudan in the Netherlands-the Hague-, hopping that it will assist you to better know the Sudan. Our aim is to communicate with you all, to provide the basic and necessary information about the Sudan, and to reflect the important political, economic and cultural events that are taking place in the country. 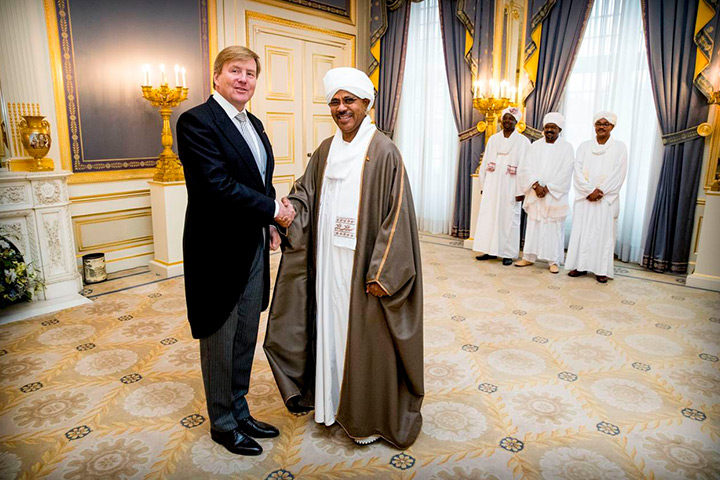 H.M. The King Wilhelm Alexander has expressed the desire of his country to boost its relations with Sudan and welcomed the positive developments in Sudan, especially in the security, peace and stability fields

On the 17th of January 2019, His Excellency Ambassador Kamal Bashir Ahmed
Mohamed Khair presented his credentials as Permanent Representative of the Republic of the Sudan to the OPCW. His Excellency expressed readiness to the General Director Ambassador Fernando Arias and his willingness to cooperate closely with all organs. H.E. expressed his country’s readiness to work with the International community to ensure that the world is free from any Chemical weapons to realize peace and stability in the world.